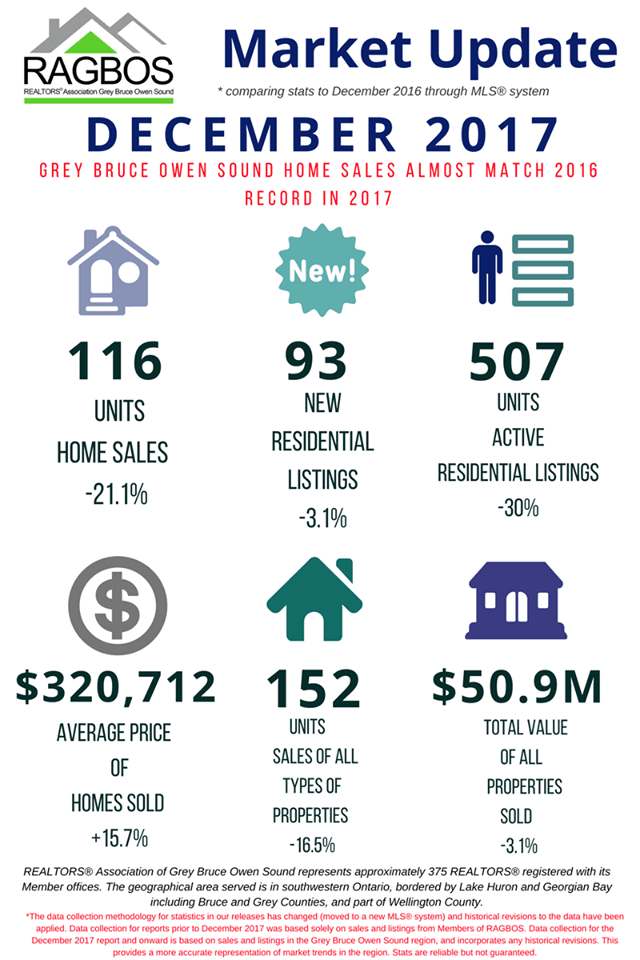 Residential sales activity recorded through the MLS® System of the Ontario Collective for the Grey Bruce Owen Sound area fell on a year-over-year* basis in December 2017 from all-time record levels in 2016.  Home sales numbered 116 units in December, down 21.1% from December 2016.  That said, this was still above most other December sales figures in history.  On an annual basis, home sales totalled 3,118 units in 2017.  That was the second best year ever, down just 1.7% (54 sales) from the 2016 record.

The dollar value of all home sales in December was $37.2 million, down 8.7% from December 2016, but still the second highest December reading on record.

The REALTORS® Association of Grey Bruce Owen Sound represents approximately 360 REALTORS® registered with its member offices.  The geographical area served by the Association is in southwestern Ontario, bordered by Lake Huron and Georgian Bay including Bruce and Grey Counties, and part of Wellington County.

* Please be advised that the data collection methodology for statistics in our releases has changed and historical revisions to the data have been applied.  Data collection for reports prior to December 2017 was based solely on sales and listings from Members of REALTORS® Association Grey Bruce Owen Sound.  Data collection for the December 2017 report and onward is based on sales and listings in the Grey Bruce Owen Sound region, and incorporates any historical revisions.  This provides a more accurate representation of market trends in the region.